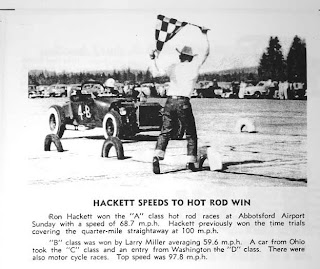 More sad news from the local scene. Ron Hackett, early member of the BCCCA, passed away recently. Here's the obituary from the newspaper:

HACKETT Frank Ronald (Ron) August 8, 1928 - March 18, 2009 Passed away quietly at the Penticton Regional Hospital. He is survived by his loving wife Betty of 62 years; daughter Robin and son-in-law Duncan Dube of Summerland, BC, daughter Kerry Hackett of Stratford, ON, granddaughters Vanessa Pinto of Penticton, BC and Taylor Pinto of Summerland, BC as well as several nieces and nephews throughout BC. Sadly predeceased by sister Shirley Jones and brother Harry Hackett. Ron loved the outdoors which showed in his many hobbies that included hunting, fishing, hotrods, boating and RV travel. In 1950 he participated in forming the British Columbia Custom Car Association and became a Past President with a life time membership. He was a member of the Burnaby Gizeh Shrine Club for many years and demitted due to health problems. In 2001 he became a member of the newly formed Greater Vancouver Motorsport Pioneers Society which honors those that have contributed to motorsports in the region. Ron had a talent for anything mechanical and in 1969 he opened his own business called Temco Controls Ltd, a successful and well respected H.V.A.C. company. After retiring in 1991 he felt it was time to do some travelling and spent many winters RV'ing throughout the Southern United States making new friends along the way. (Our RV was a 40ft. MCI bus which he converted from the ground up creating a beautiful home on wheels). In 2006 we decided not to travel anymore and moved to Summerland looking forward to spending many peaceful years in the Okanagan but it was not to be. Ron was a strong-willed and a determined man and he lived his life "HIS WAY", but beneath it all there was a man only I knew loving, caring, gentle and sentimental. He was the "WIND BENEATH MY WINGS". His passing has left a void in our lives but the love and the memories will always keep his spirit alive. As per Ron's request there will be no service. In lieu of flowers please make donations to the Alzheimer Society of B.C., No. 104 - 35 East Westminster Avenue, Penticton, BC V2A 1H7. With special thanks to the care givers and staff of the Summerland Seniors Village for their support and patience through our sad and tragic loss. Words can not express gratitude. Funeral arrangements are entrusted to the care of Providence Funeral Homes. Condolences may be directed to the family: summerlandfuneralhome@vip.net
Posted by befastpast at 10:00 AM